The Ziegler company was founded in 1908.

In 1956, Ziegler is appointed as Official Fair Forwarder and on-site handling agent for the Brussels World Exhibition ’58.

Ziegler Fairs and Exhibitions is the pioneer for transports and handlings of industrials fairs in China and Africa.

Forty years after Expo ’58, Ziegler is appointed as the official logistics partner for Expo ’98 in Lisboa.

Since July ’99 all activities related to fairs and exhibitions are centralised under one entity “Ziegler Expo Logistics” active mostly on the Brussels international fairground but also on major fairgrounds in the country as well as worldwide. 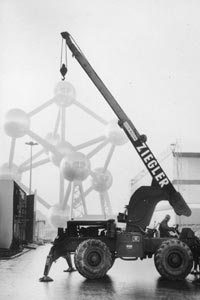